how to: be relevant. 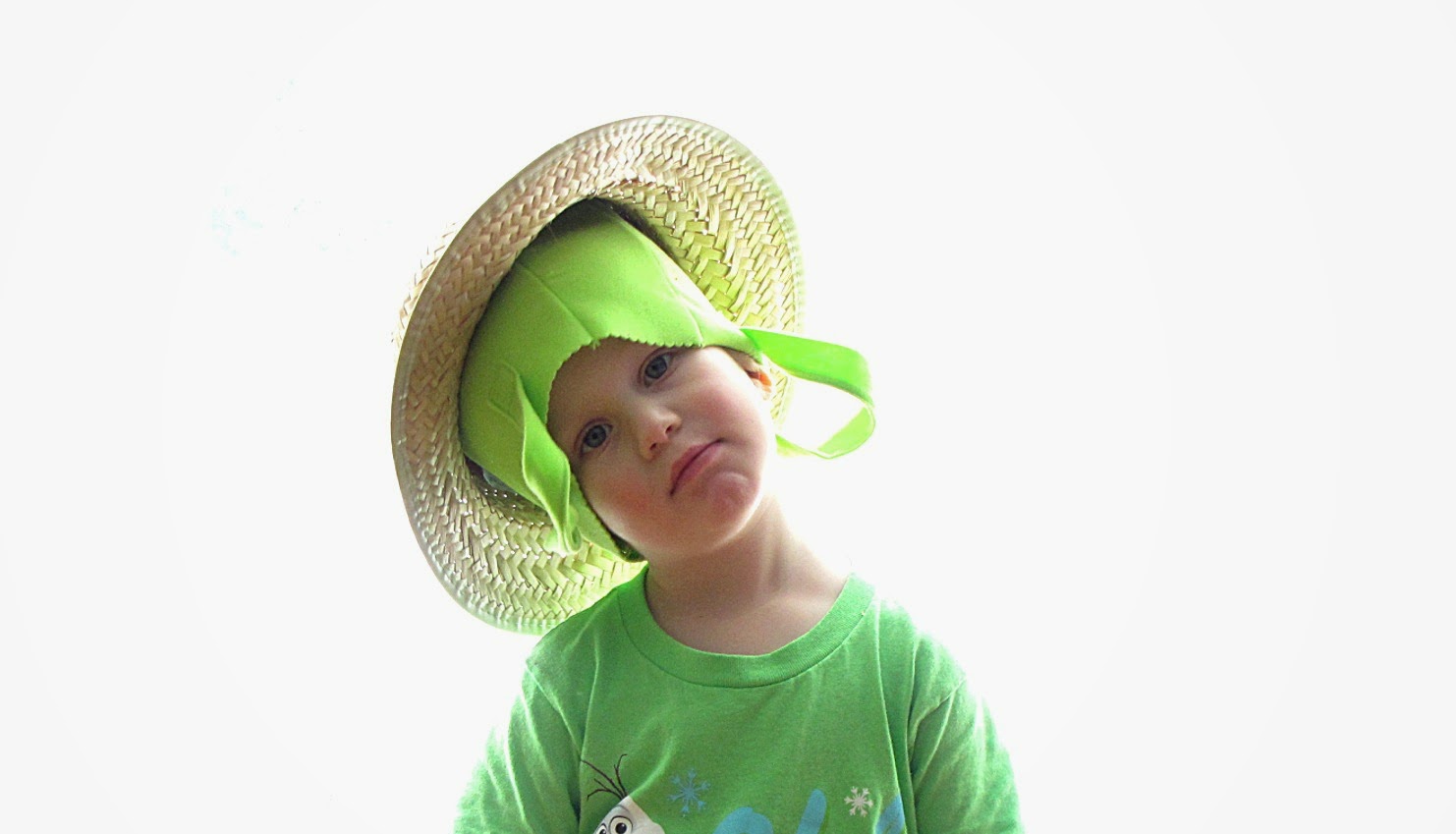 Curious title for a blog here, isn't it?
But I've discovered a 'secret' about life (that maybe you already know too).

Now, I didn't know this secret when I was bit younger.
Like the time I started to work at a youth drop-in and wondered "how will I relate?"
Or, when our friends started having kids (before we were even on that wagon).. and we thought "ugh! We are NOT kid people.. how can we connect?"
Or, maybe it was when we'd visit our Grandma... and I'd see other seniors slouched in the halls and not know where to start with a conversation.

Old, or young.  Rich, or poor.  Teenagers, or toddlers.
We all can struggle with knowing how to 'connect' or even feel relevant to other demographics and generations around us it seems.

So what's the secret I've discovered, that makes you able to connect with anyone on any level...?

Both the old and the young can see it a mile away.
Even the teenager covered in goth makeup, or tattoos, or piercings... recognises when you see through them - to them - with respect and warmth.
That one inch thick surface that so many of us use to differentiate ourselves by... is filled with the same substance that unites all mankind.
A soul.

If we can look with the eyes of faith, the eyes of love, to see that soul in every one we meet... we would find ourselves connecting with many around us that we didn't feel 'relevant' enough to talk with.

We're not so very different after all.
Mel ;o)

Posted by Mel at 14:17 No comments: Links to this post 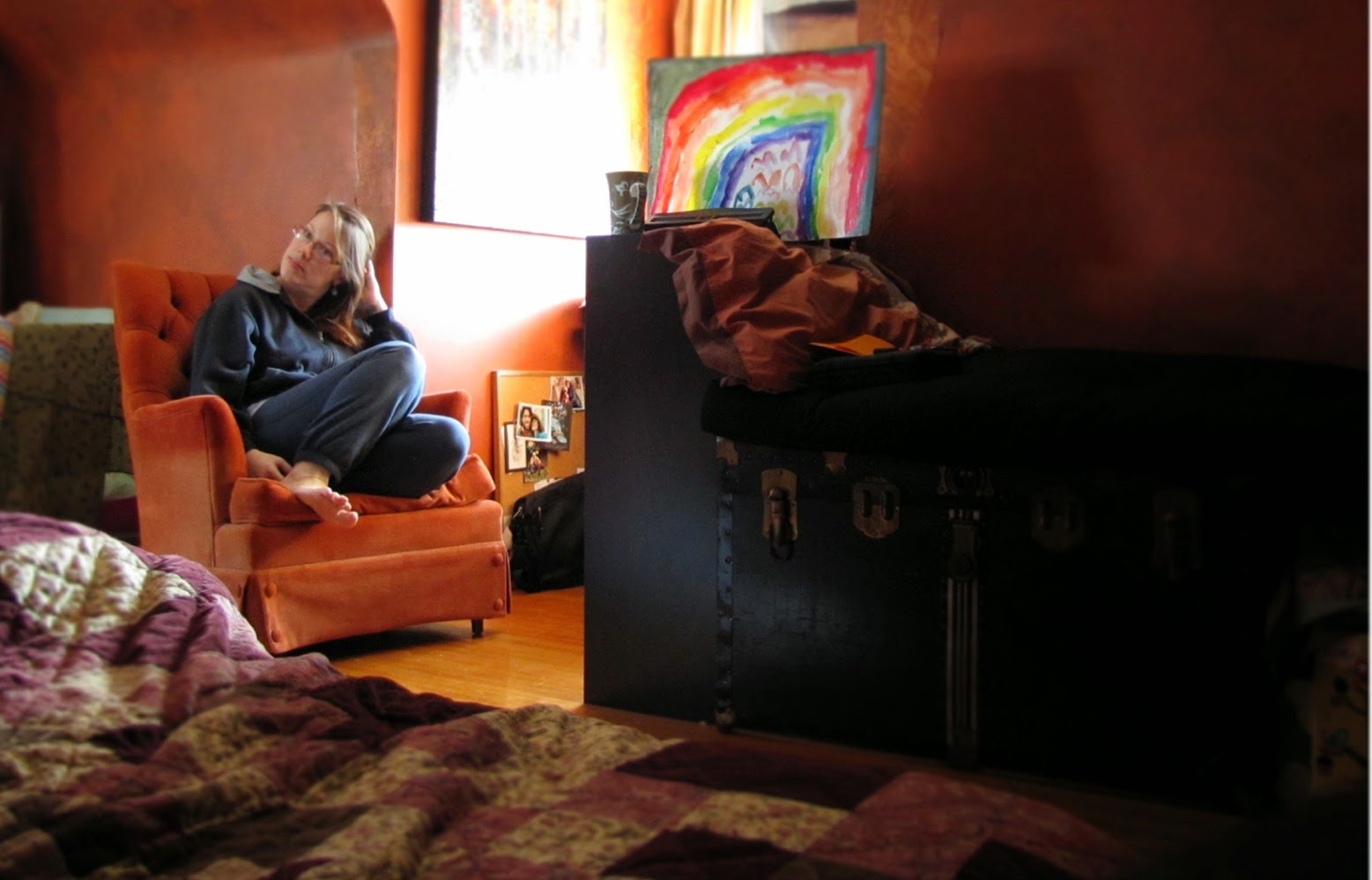 There are days when the sun is shining, and I have a good day with the kids.
We've shared laughter, meals and tickles.

Then, just when you've let down you 'guard' - and you start to pride yourself on being a pretty decent mama - things start to unravel.
Someone is whining about the texture of their snack.
The baby is shrieking because she can't figure out how to lay down to nap.
The constellation of crumbs under the table is growing.
Every where I look I just see chaos and need.
I feel my eye starting to twitch.

Then, it just takes one little thing for me to crash like a house of cards.
Maybe like the futility of picking up that certain toy for the millionth time today.
I start to fume inside.
The child pees next to the potty instead of in it.
I choke-hold the air in front of me.
The phone rings right when I'm changing a diaper.
I feel utterly exasperated.
At this point I'm ripe to explode.
On the inside.
(I told my husband we'd be rich if we could patent a 'scream room' for mamas who are having a meltdown.  You know, just a sound proof - padded - space that we could have our own temper tantrum in.
Because I refuse to yell at my family, but if they were inside my head...)

Now, I've written before how isolating that moment feels, when you've seen such a beast of anger lurking within your own heart (confession post found here)... but I want to further share.
I think many of us step under a burden of discouragement at this stage.
Because after some 'blow out' of my anger, I fall into a sullen silent stage.  Moping around the house, smothering my heart with a heaping yoke of guilt and contempt.
I feel like I've seen many people fall into this rut... and lose all hope of climbing out.
Maybe because this dark under belly of parenting caught us by surprise.
We were told that there would be diapers and delights with having children.
We likely weren't told there would be deep discouragement and despair.

Because, if you ever want to feel like you're a pretty decent person, don't have kids.
(Actually, just keep yourself isolated from any and all things that put enough pressure on your heart to push out all the nasty bits lurking beneath the surface).

But, if you want to grow and learn what grace looks like.. have kids.
The path that shows our inner ugly bits in the brightest light, is also the path that leads us to humility. 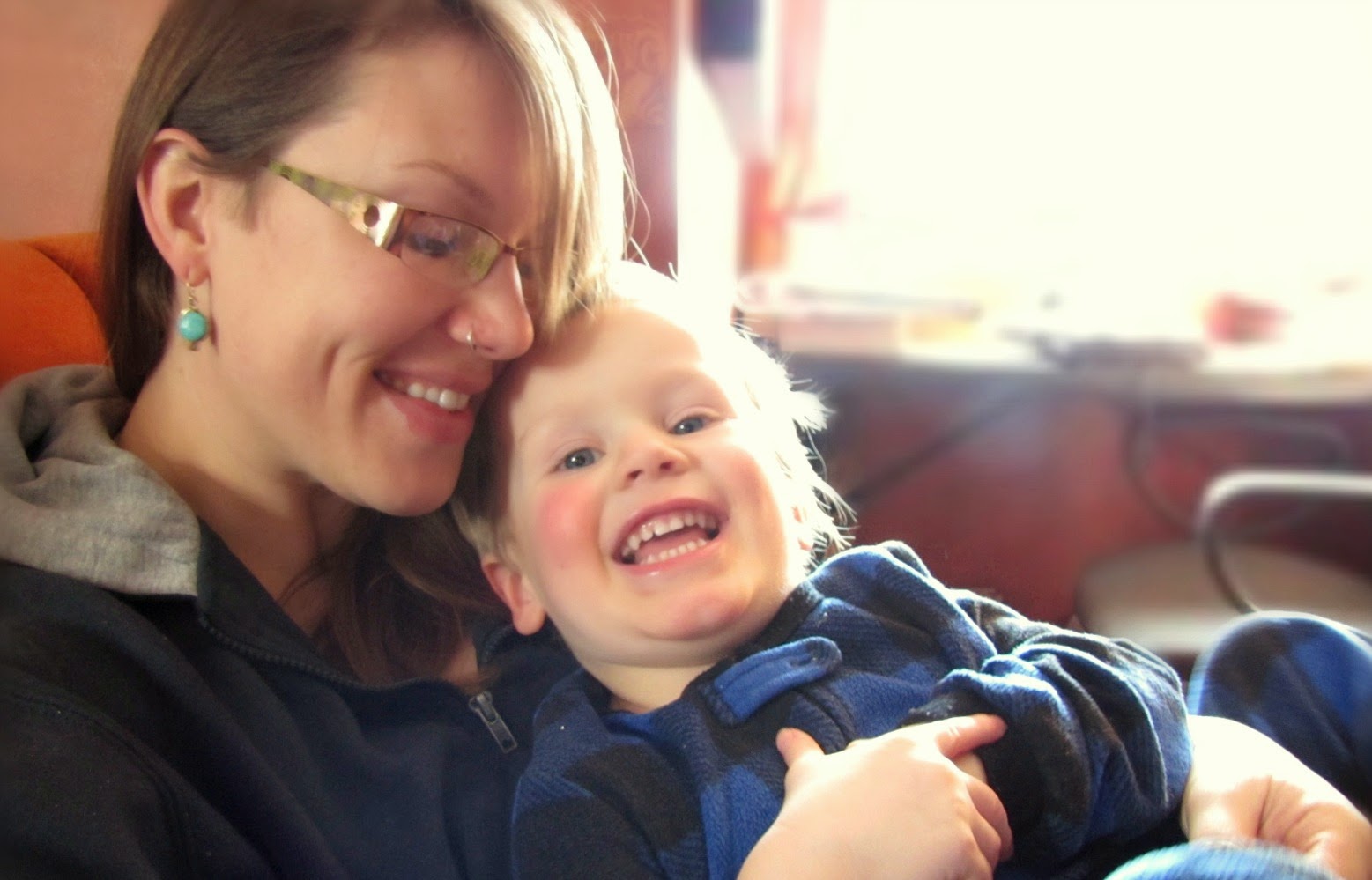 To be honest, I was having one of these melt-down moments this week.
In the wake of this discouragement I happened to pull a book of our shelf and find this quote:

"It is of great importance to guard against discouragement on account of our faults.  Discouragement is not a fruit of humility, but of pride, and nothing can be worse.  It springs from a secret love of our own excellence.  We are hurt at feeling what we are.  If we become discouraged we are the more enfeebled, and from our reflections on our own imperfections, a chagrin arises that is often worse than the imperfection itself.  Poor nature longs from self-love to behold itself perfect; it is vexed that it is not so, it is impatient, haughty, and out of temper with itself and with everybody else.  Sad state; as though the work of God could be accomplished by our ill-humor.  As though the peace of God could be attained by our interior restlessness"
(quoting Fenelon from Hannah Whitall Smith's "The God of All Comfort")
---

I'm learning to find every trial and tempest that pushes me to despair in myself.. as a gift to look past myself.
Introspection in a bottomless vortex.
Guilt is a terrible motivator.

For me, looking to grace, looking outside myself to the Giver of grace, lifts my heart from this terrible rut.  When I see the God who reaches down to me in my brokenness (instead of waiting for me to be 'good enough' or 'perfect enough' to reach up to the heavens), I see hope.
When I am discouraged, I need to have the courage to behold Christ.
Every time I fail, to fall upon His grace afresh.
"..Where sin abounds, grace abounded all the more" Romans 5:20.

So, let's not resent those children for pointing out our darkest parts.
Let's not resent our imperfection and stroke the ego till it's purrs again.
Let us throw aside the burden of pride, and take on the light yoke of humility.

The harder path is the better path in the end. 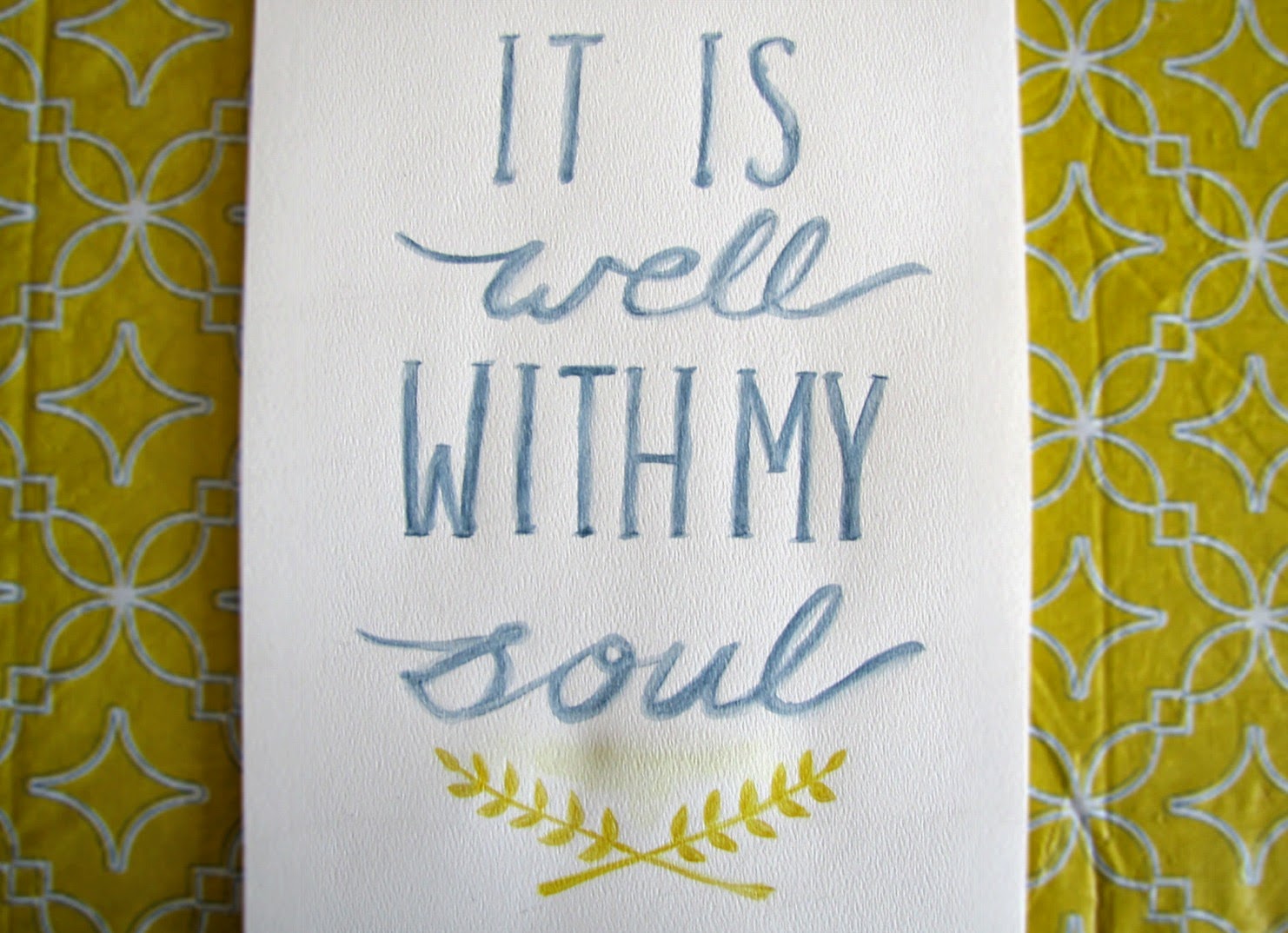 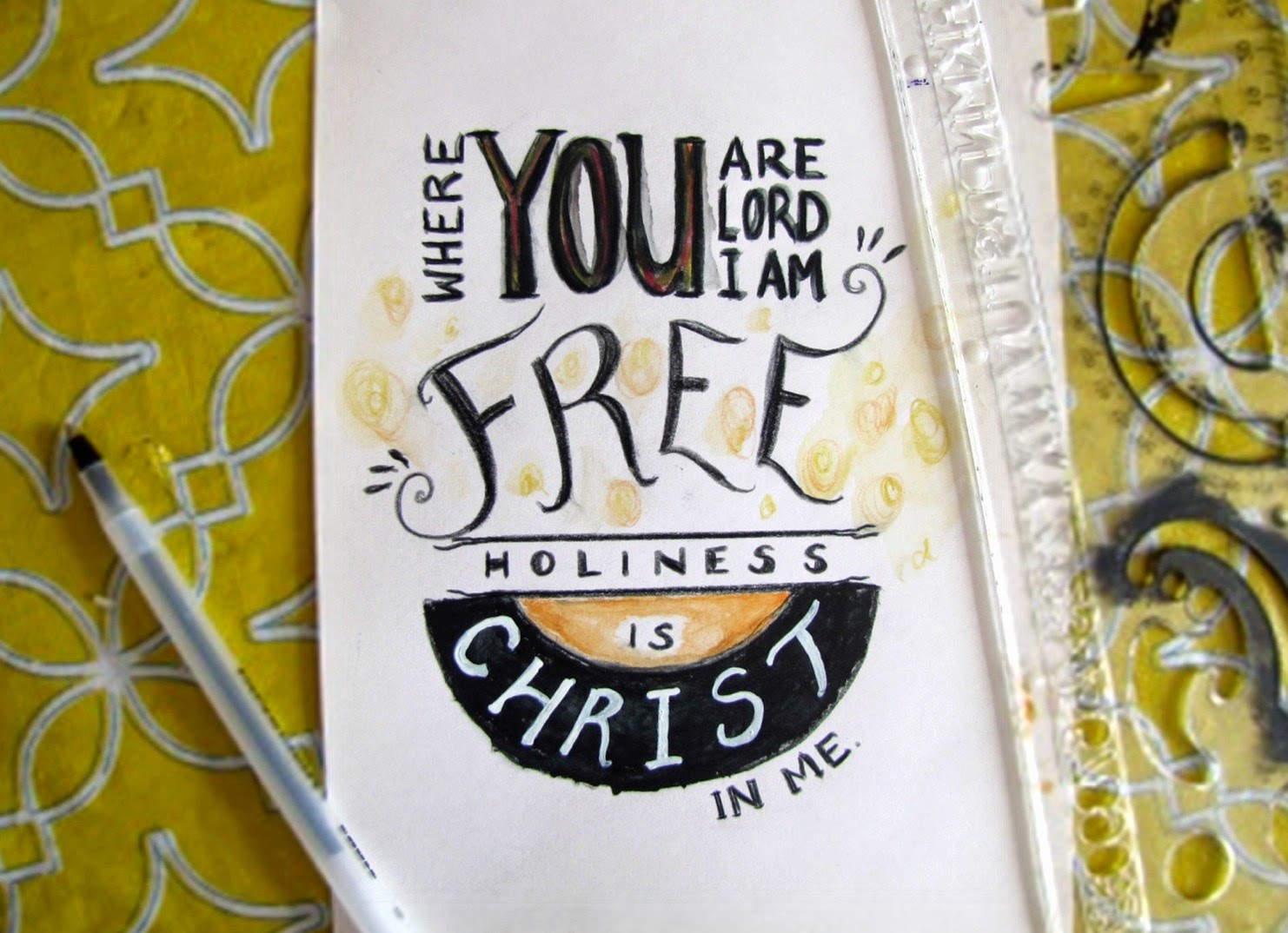 So, I haven't posted any comics lately... but I've still been doodling!
I guess like every.one else on the pinternet, I do love fonts and artsy script work.  Lately I've put my favourite song lyrics and scripture verses up around the kitchen, after doodling them out with watercolour pencils and pens at the dining table.

The first "It is well" picture was for a friend.
The second is from a powerful song that gets stuck in my head.

The kids and I have also been having fun creating and painting. 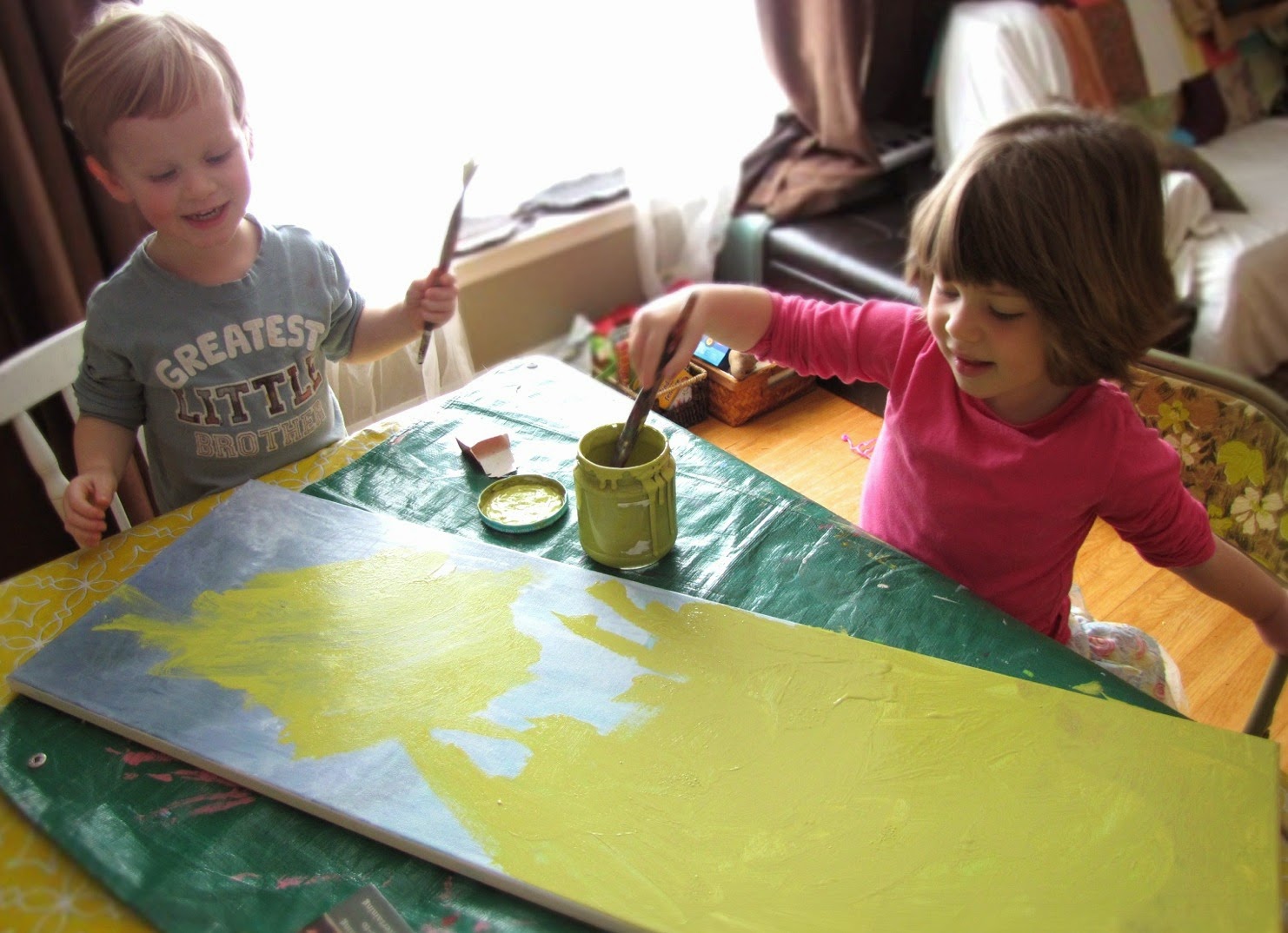 This is the first coat of a project we're still putting the finishing touches on, stay tuned.

What are you creating lately?
Mel ;o)
Posted by Mel at 19:44 No comments: Links to this post

resources to warm the heart's flame: 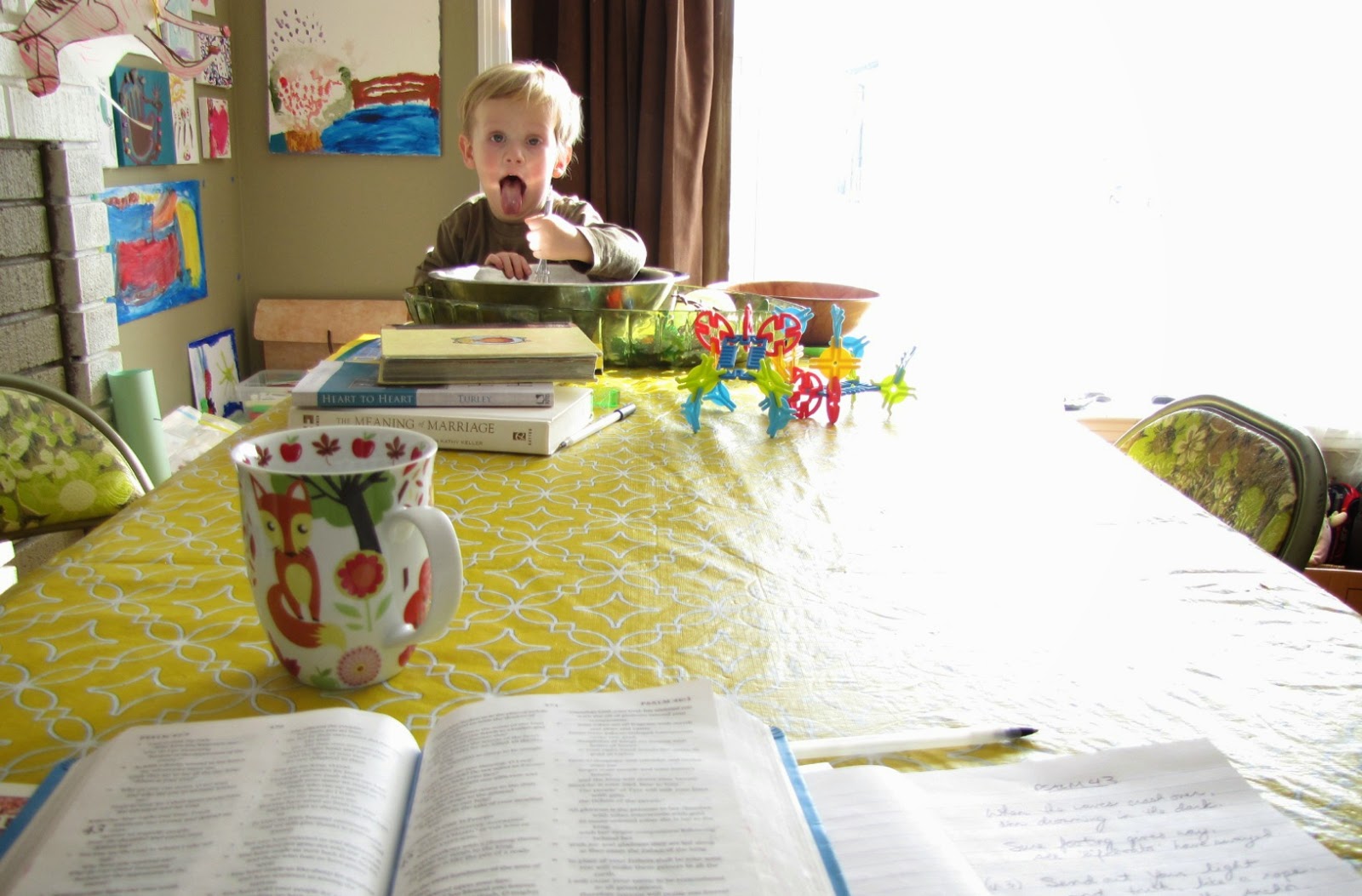 This is a follow up post to the one I wrote a while ago about getting *real* into God's Word. ("whispers amidst wailings" - post)
I had mentioned how I like to keep lots of 'kindling' of resources in my day to help my heart light up for the joy of discovering Christ is all the minutiae of our days.  Some of you asked if I could share those resources here... so, yes!

----
A couple disclaimers/clarifications to start:
1. This isn't a list of simple, fun family reads... it's focused on resources that exalt and direct the heart to the Bible, to knowing Christ, to living fully in His truth and love.  So I trust you won't jump on me if I didn't mention you're favourite Dr.Seuss book. 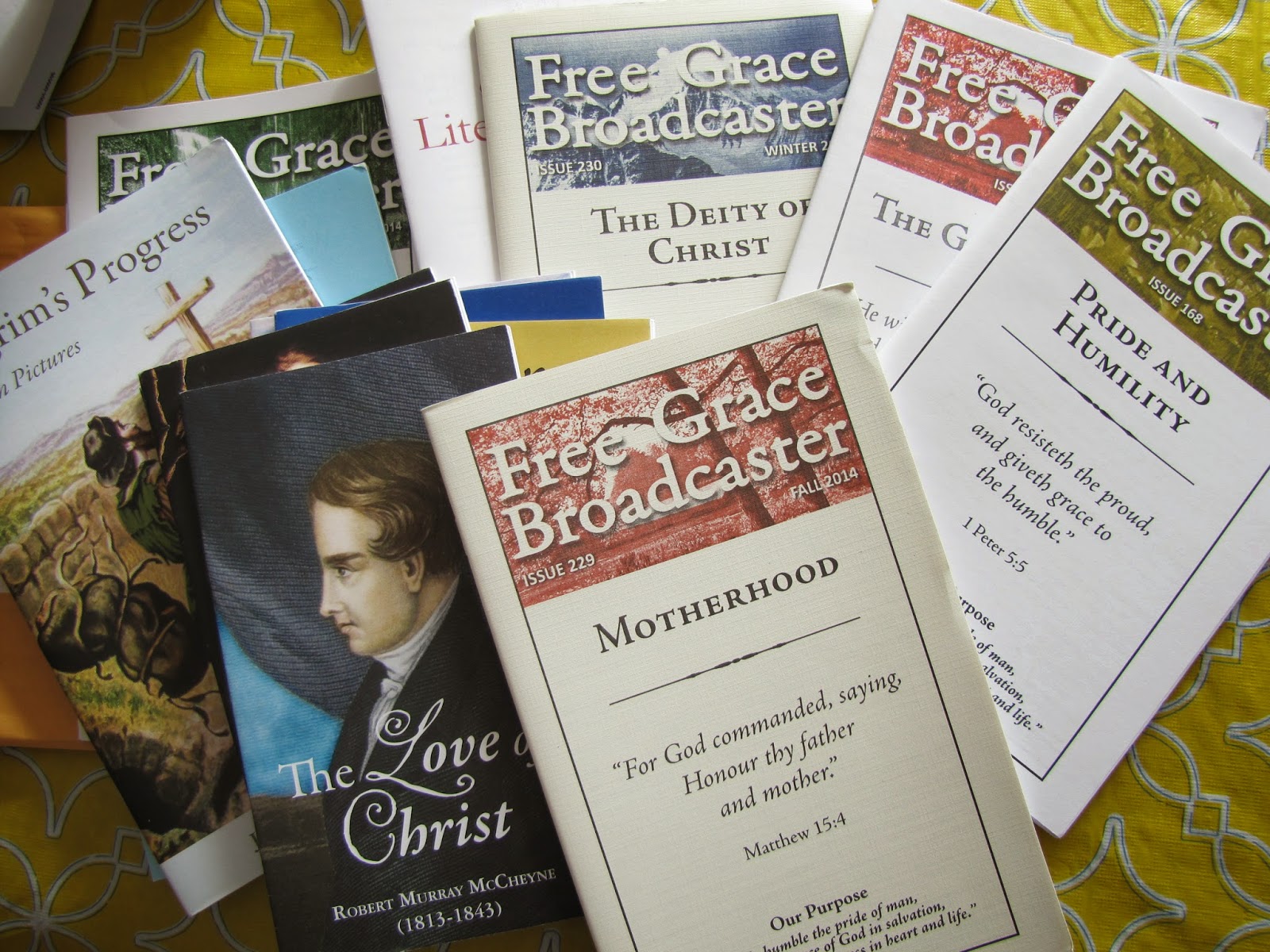 *Free Grace Broadcaster is an online resource filled with writings by many of the puritans and other heavyweight theologians.  You can order FREE publications/tracts as seen above too!

* Jesus Storybook Bible/Songs to Make Your Heart Sing - if you don't own these.... well, they're a must have for your family in my opinion!  Such simple and profound truths for your child's heart and yours to see Jesus in every page of the Bible.

*The Valley Of Vision - another must have compilation of one page 'prayers' that make you feel like you've never prayed before.  Deep, rich, robust theology and doxology in these pages.

Throughout the day I'll often be found listening to these options:

* Songs for Saplings is a wonderful resource of music for your family.  Simple songs that put verses into song for young and old hearts to sing all day.

* SermonAudio has an exhaustive list of preachers and sermons to access.  Even the 'oldies' are on there - Spurgeon and the like.  For more Reformed Theology... there's also RefNet radio.

Some other highly recommended books I've been reading lately (and re-reading again!).

*Treasuring Christ (when your hand are full) by Gloria Furman
*The Disciplines of Grace by Jerry Bridges
*Stepping Heavenward by E.Prentiss

You can also check back on that year old post of helpful books I listed then too!

I hope this helps give you some fresh resources to focus your heart on Christ, and living by His grace and for His glory.  I have found myself buoyed up with greater joy and deeper peace in these past months as I grow this direction.

Our nest is busy with three kids, sure.  But we make time for what we desire don't we?
It's also sets a great example to our children, for why would they believe us when we say we 'love Jesus' if they don't see us delight to spend time reading/learning/praising Him throughout the day?
Now, off to do some more reading! ;o)

Mel
Posted by Mel at 12:14 No comments: Links to this post 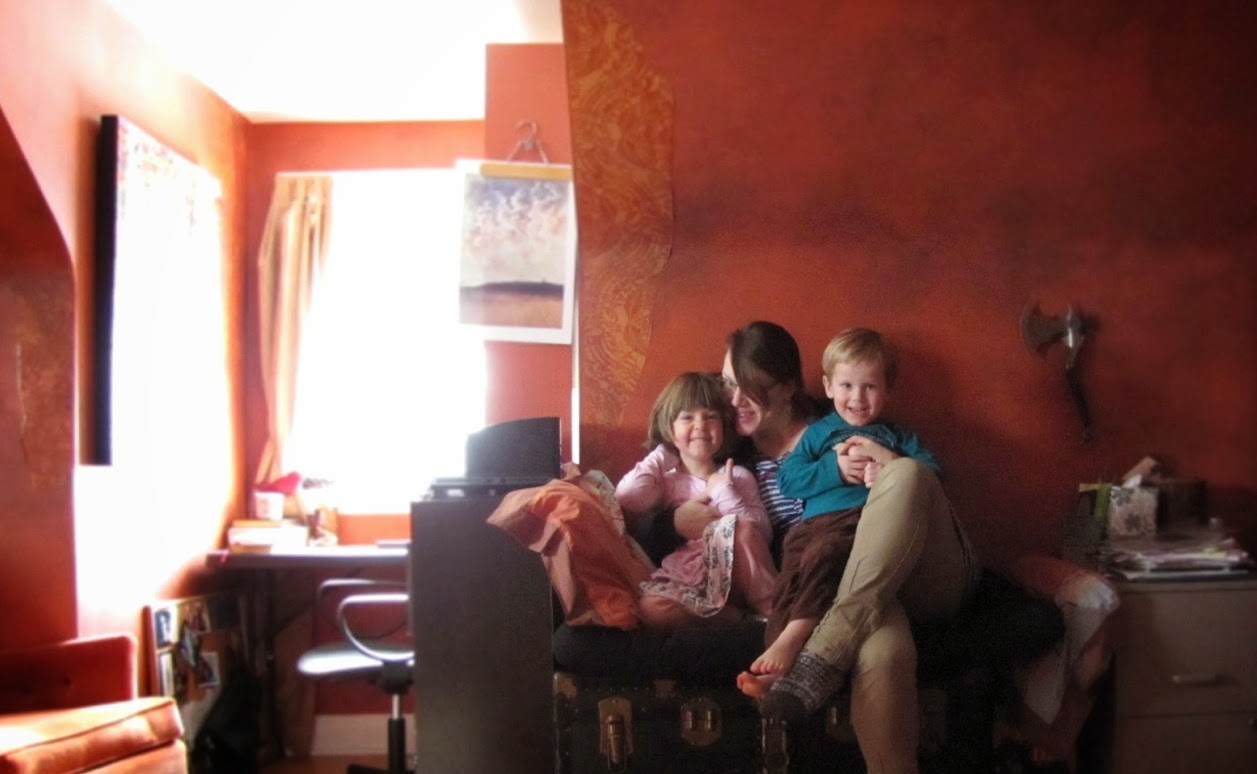 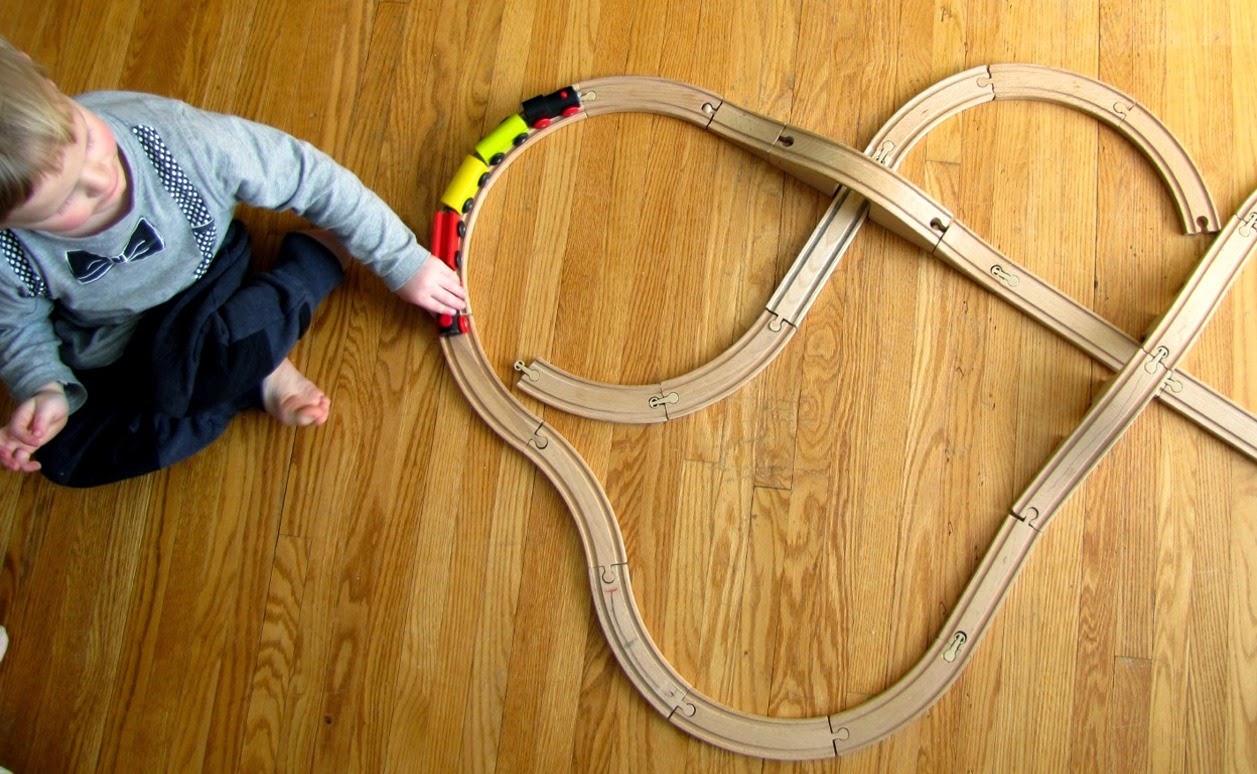 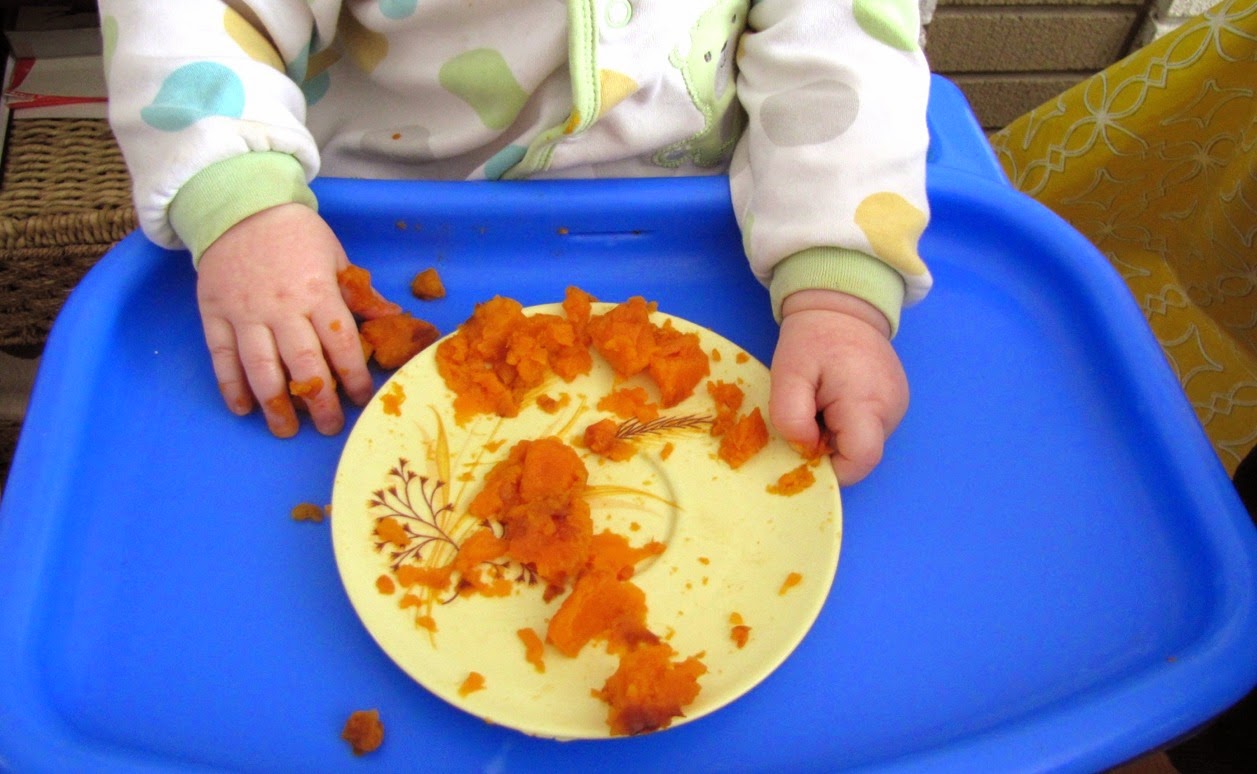 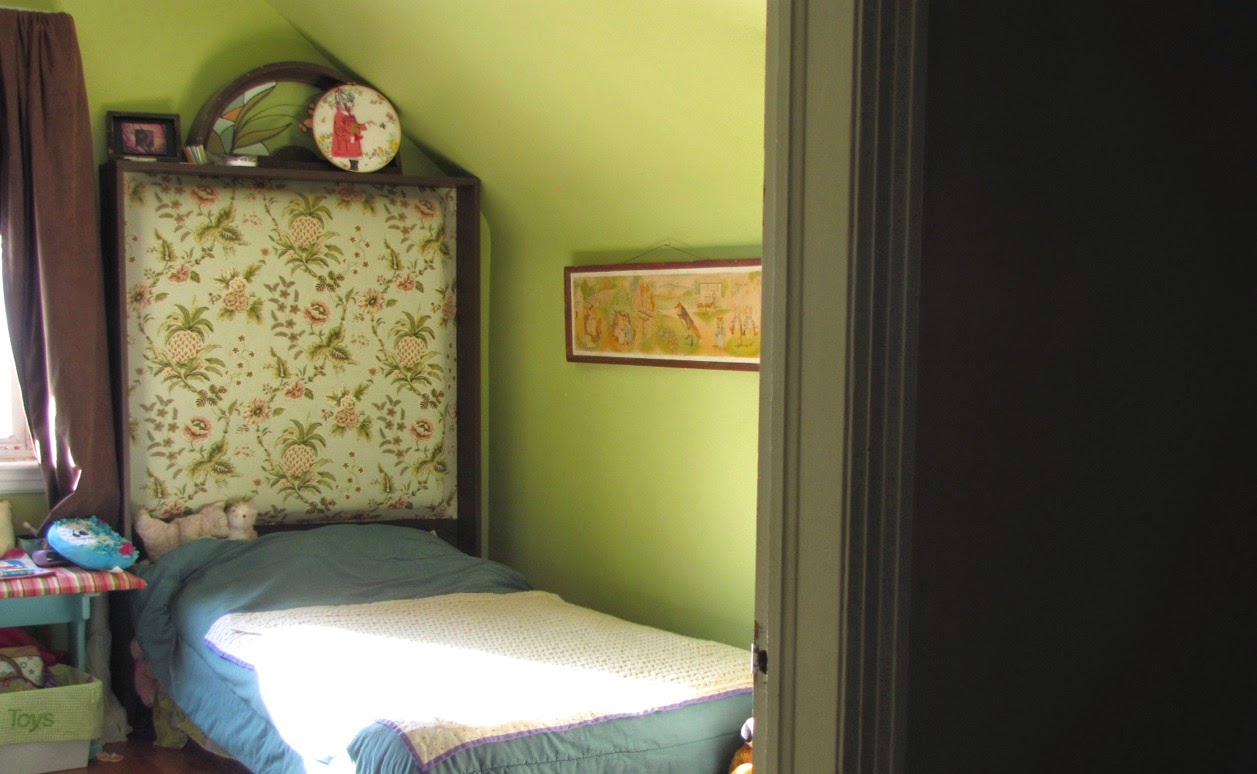 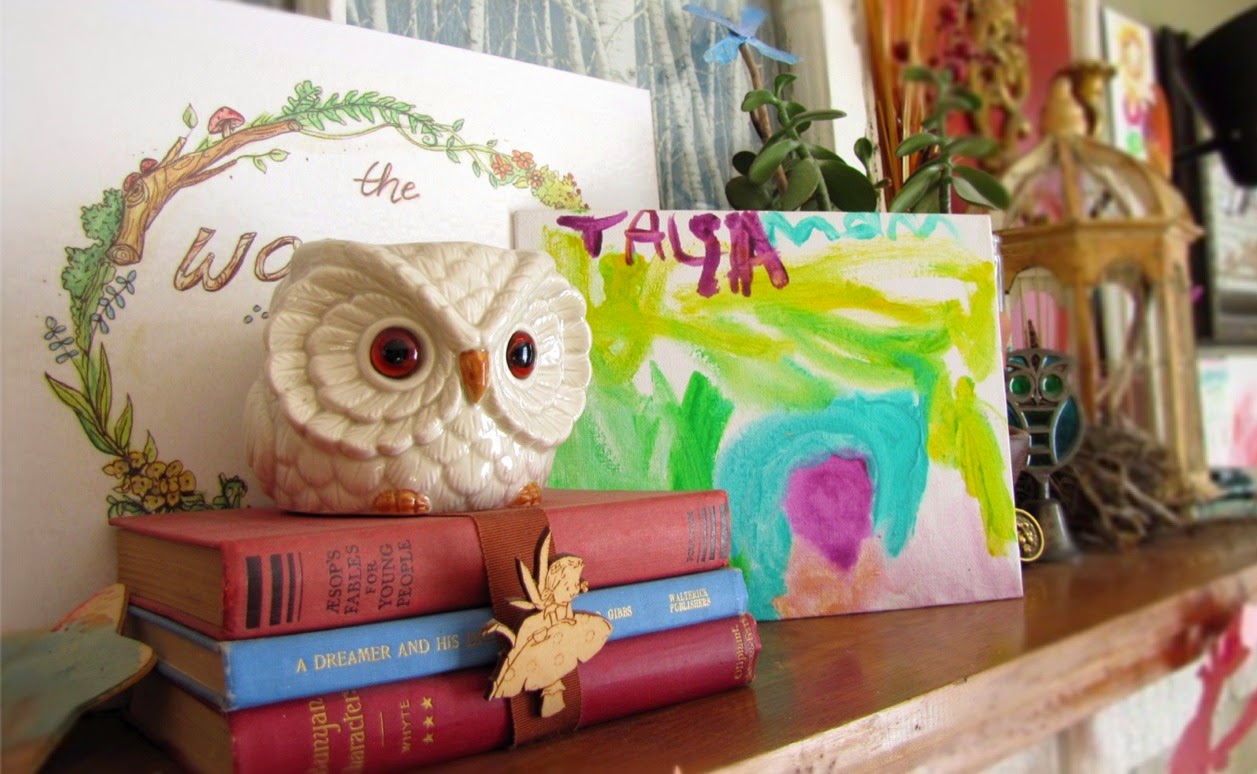 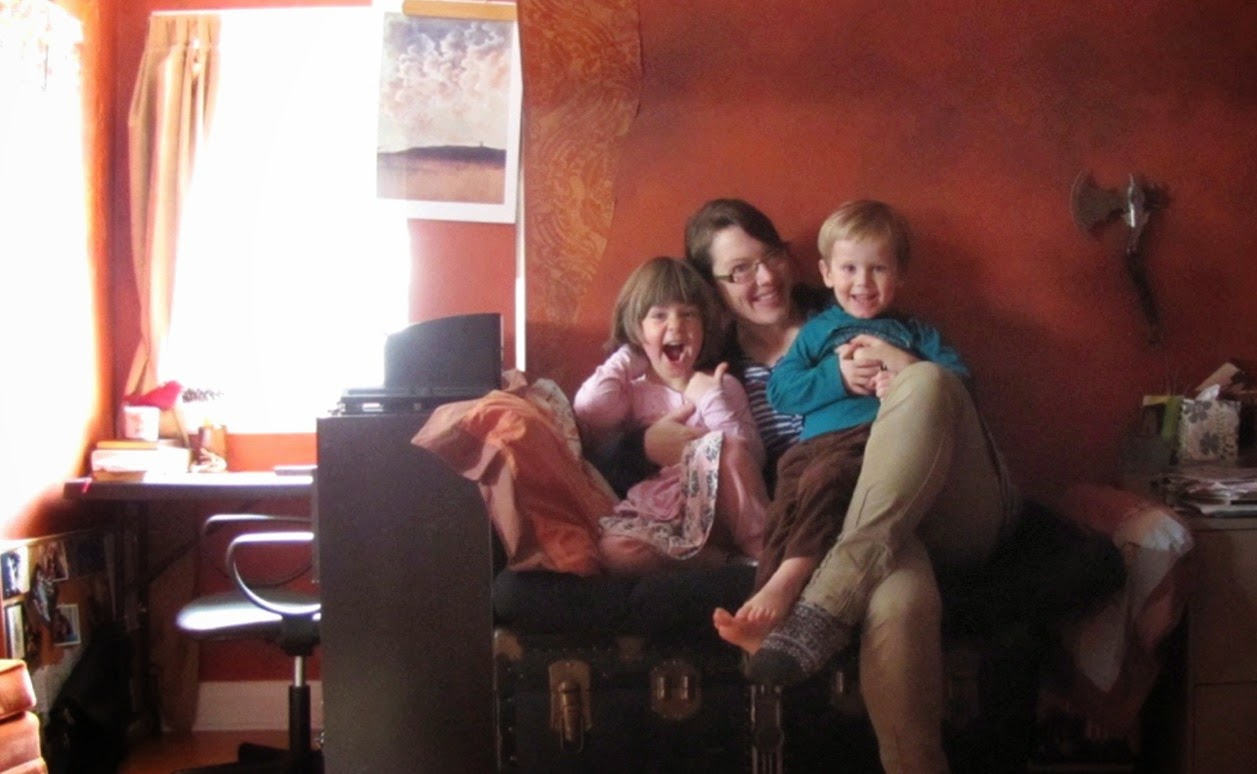 While the snow keeps piling up outside.. we're keeping cozy and creative in our nest. 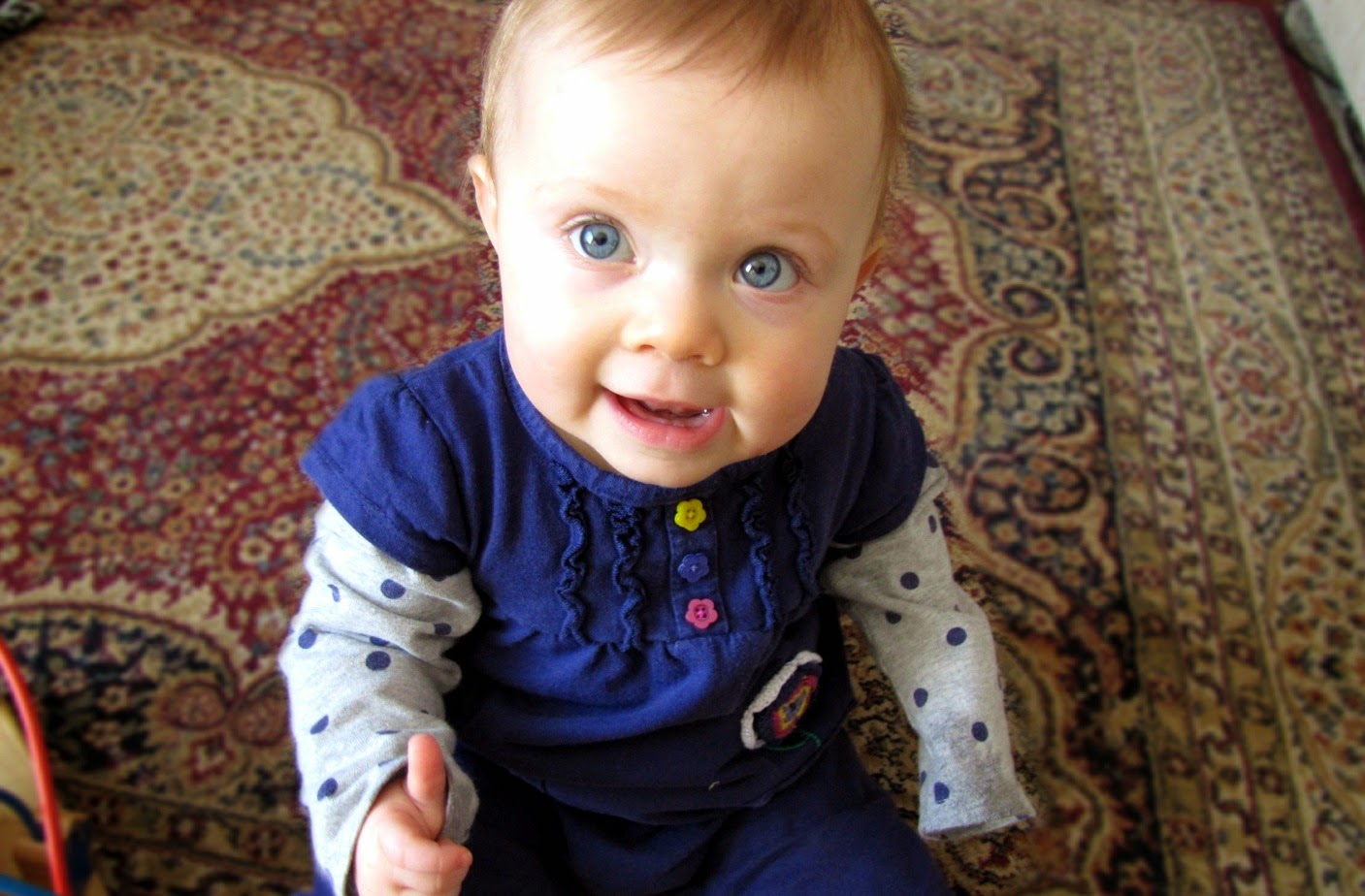 1. Those bright searching blue eyes.
2. The smile as wide as a banana.
3. The way she sucks her thumb and rubs her nose with her forefinger.
4. Her crazy squeals of delight in the jumper.
5. The seizure shakes at taking a toy away.
6. The backwards crawl across the floor.
7. Her happy clappy hands.
8. The joy of sibling love.
9. The smell of her neck.
10.  The strawberry blonde shimmer of her hair.
11. Her sweetness that fills our nest.

Yes, our lil' Talia is almost 11 months now!
She's still as gentle as a lamb all day, and still as loud as a lion all night.

:Welcome to our Nest: